The United Nations of Earth reporting on this issue: "Caricom, China/Germany, Cyprus & other topics - Daily Press Briefing (21 July 2021)"
The topics: Noon briefing by Farhan Haq, Deputy Spokesperson for the Secretary-General. Highlights: - Caricom - DSG Travel - China/Germany - Cyprus - Ethiopia - Mali - Iraq - Brazil/Ecuador - Myanmar - Tax Committee Caricom This morning, the Secretary-General addressed, by a video message, the eleventh CARICOM-UN General Meeting. He said that the combined effects of the pandemic and climate change in the Caribbean region have created the conditions for an epic “perfect storm,” and said that this crisis requires innovative thinking in a number of areas. He reiterated his call for G20 countries to ensure that vaccines are distributed equitably, and also his call to the international community to urgently help countries in dire financial distress to tackle both short and medium-term debt and liquidity challenges. He also stressed the importance of climate financing ahead of the COP26 in Glasgow. The Secretary-General also thanked CARICOM for its unwavering support to the UN mission in Haiti and its willingness to play a role in facilitating this national dialogue. China/Germany The Secretary-General has been concerned about recent devastating floods in different parts of the world and has been in touch with leaders accordingly. You will have seen our statement last week on the floods in Western Europe, including in Germany. The Secretary-General sent a letter to German Chancellor Angela Merkel to express his condolences for the lives lost due to those floods and his sympathies to all those who have suffered losses. Over the weekend, China was also hit by heavy rain and flooding, and the Secretary-General is sending a letter to President Xi Jinping to convey his heartfelt condolences on the tragic loss of lives and devastation. The Secretary-General’s sympathies and thoughts go to the bereaved families and to the Chinese Government and people. CYPRUS Elisabeth Spehar, the Secretary-General’s Special Representative for Cyprus, briefed the Security Council in closed consultations this morning on the situation there. And as you saw, she just spoke to reporters at the stakeout and emphasized the need for the parties to avoid unilateral actions. Full Highlights: https://www.un.org/sg/en/content/noon-briefing-highlight?date%5Bvalue%5D%5Bdate%5D=21%20July%202021


Click here for more information, to subscribe to the channel of United Nations or to watch the video on YouTube.
Reported by Pierre Bourdain at July 21, 2021 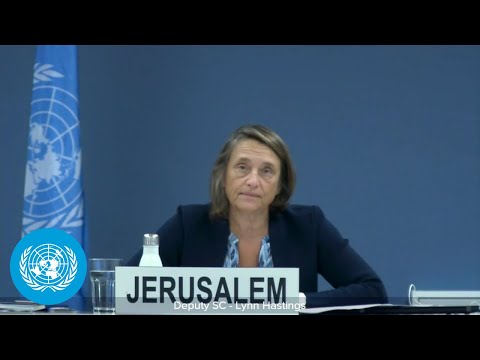