The United Nations of Earth reporting on this issue: "Russia, Afghanistan, Gaza & other topics - Daily Briefing (22 June 2021)"
The topics: Noon briefing by Stéphane Dujarric, Spokesperson for the Secretary-General. Highlights: - Secretary-General/Belgium - Russia - Afghanistan - Gaza - Famine - Nigeria - Mozambique - Myanmar - COVAX - Cuba - Resident Coordinators - Noon Briefing Guests Tomorrow - Financial Contribution SECRETARY-GENERAL/BELGIUM As we announced yesterday, the Secretary-General is heading off to Brussels tonight for a series of meetings with European leaders, as well as with Belgian authorities. He will begin his programme tomorrow with a meeting with the European Commission, during which they will discuss several issues, including collaboration between the European Union and the United Nations, the promotion of a sustainable and inclusive pandemic recovery based on the Sustainable Development Goals, global access to COVID-19 vaccines, climate and multilateralism. Also, as a reminder, on Thursday, the Secretary-General will deliver an address to the European Parliament in Brussels. We will also keep you updated on his activities while in Brussels.   RUSSIA The Secretary-General this morning spoke by prerecorded video message today to the 9th Moscow Conference on International Security. Mr. Guterres noted that, as a founding member of the United Nations and a permanent member of the Security Council, the Russian Federation has always been a champion of the work of our Organization, and of multilateralism. He stressed the important role of partnerships in addressing the full range of global peace and security challenges, from nuclear disarmament and non-proliferation to preventing the use of chemical and biological weapons; from cyber security to disinformation. As we told you yesterday, the Under-Secretary-General for Peace Operations, Jean-Pierre Lacroix, is representing the Secretary-General physically in Moscow at this conference. While in Moscow, Mr. Lacroix will meet with senior Russian officials and he will thank Russia for its support and contributions to peacekeeping.   AFGHANISTAN Deborah Lyons, the Special Representative of the Secretary-General for Afghanistan, briefed the Security Council by videoteleconference this morning. She said that she could not overstate her concern regarding the present situation in the country. She warned that all of the major trends – whether concerning politics, security, the peace process, the economy, the humanitarian emergency, or COVID – are negative or stagnant. She said that the mid-April announcement that all international troops will be withdrawn in the coming months sent a seismic tremor through the Afghan political system and society at large. The withdrawal decision was expected, but its speed – with the majority of troops now already withdrawn – was not, she added. The Special Representative noted the recent offensives by the Taliban, saying that more than 50 of Afghanistan’s 370 districts have fallen since the beginning of May. Ms. Lyons said that the UN Mission continues to work within its mandate and, in cooperation with Member States, to find ways to move forward in the negotiations. But she warned that the drivers of conflict seem, for now, to overwhelm the reasonable and hoped-for modalities of negotiation.   GAZA The UN Relief and Works Agency for Palestine Refugees (UNRWA) is launching a $164 million humanitarian and early recovery appeal following the hostilities in Gaza in May. This updated appeal incorporates the immediate emergency response actions implemented by UNRWA in Gaza and the West Bank between 10 and 31 May, as well as early recovery needs of Palestine refugees in Gaza and the West Bank, including East Jerusalem. The appeal for this year outlines the needs for emergency shelter repairs, humanitarian assistance to displaced families and emergency repairs and maintenance of UNRWA installations. The funds will also be required to temporarily subsidize rental payments for those Palestinian families, whose shelters have been completely destroyed or damaged, in the form of Transitional Shelter Cash Assistance. FAMINE The World Food Programme (WFP) today warned that famine – already present in four countries – could become a reality for millions of people around the world, without urgent funding and access to families cut off by conflict. Recent WFP analyses show that 41 million people are teetering on the very edge of famine in 43 countries, and the slightest shock would push them over this precipice. This includes over half a million people in Ethiopia, Madagascar, South Sudan and Yemen. Other countries of particular concern are Nigeria and Burkina Faso. WFP said that conflict, climate change and economic shocks have been driving the rise in hunger, but this is compounded by soaring prices for basic foods this year. I think we’ve been flagging to you on a regular basis the Food and Agriculture Organization (FAO) Price Index which keeps going up. Read More: https://www.un.org/sg/en/content/noon-briefing-highlight


Click here for more information, to subscribe to the channel of United Nations or to watch the video on YouTube.
Reported by Pierre Bourdain at June 22, 2021

The situation in CHILE [Microinternationale]

ALL DONATIONS for this stream will go to the ongoing HOUSING CRISIS FUNDRAISER for our comrades currently houseless or facing eviction. Do... 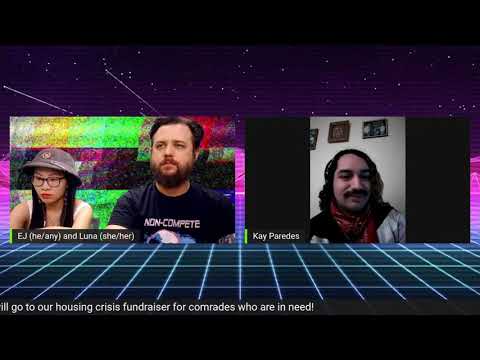